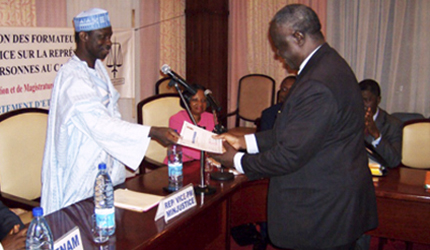 Anti-trafficking in persons (Anti-TIP) efforts in Cameroon were given a boost in early October, when the ABA Rule of Law Initiative (ABA ROLI) hosted a two-day training for magistrates and lawyers. The training, which was conducted in collaboration with the Ministry of Justice, was intended to aid the 36 participants in effectively prosecuting human traffickers in Cameroon. Presidents of various courts and representatives of Cameroon’s Bar Associationwere among the attendees, who were informed about the global human trafficking issues and Cameroon-specific topics.

During open discussion, the participating magistrates recommended that Cameroon increase the number of workers dedicated to anti-TIP, especiallymagistrates. They also suggested a three-prong strategy for more effectiveanti-TIP efforts: 1) a national agency to consolidate anti-TIP programs; 2) drawing attention to the nation’s human trafficking problem through mediacampaigns; and 3) promoting pro bono and amicus curie services for victims.

The training was held as part of ABA ROLI’s efforts to train all actors along the intervention chain. Previous training sessions have been held for the police and gendarmes. You can read more about these trainings at <www.abanet.org/rol/news/news_cameroon_first_tip_training.shtml>.