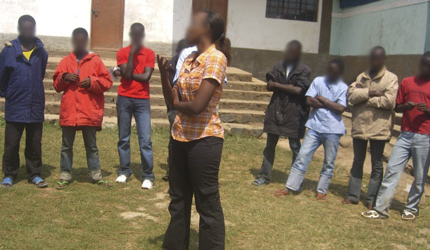 The disarmament, demobilization and reintegration (DDR) process, which aims to provide real opportunities for these war survivors, has been challenging for both the country and the former child soldiers alike. Many children, particularly former soldiers of the Forces Nationales pour la Libération(FNL), languish in prison for months or years, often without being charged.

An additional complication in the reintegration process is that many former child soldiers are detained in prisons far from their families, which strains familial relationships and limits contact. Many are also held in provinces where they did not commit crimes, hampering the provision of legal services.Paralegals, lawyers, judges and magistrates are required to travel between prison sites and the provinces where crimes were committed to obtain and finalize case files and interview witnesses. To alleviate this burden, ABA ROLI helps to address security concerns and to cover transportation costs for justice sector officials working on former child soldiers’ cases.

To bolster Burundi’s weakened criminal justice system, ABA ROLI, inpartnership with AJCB, Fondation Stamm, and TPO Burundi recently organized trainings on juvenile justice and child soldier issues. The trainings, attended by 65 lawyers and paralegals and 45 police officers, helped to increase the justice system’s capacity to address cases involving former child soldiers. Many of the former child soldiers are profoundly traumatized. They often lack a supportive social network or regular access to their families. For those former child soldiers that are able toreturn to their families, there are often difficulties readjusting to the rules and authority at home and in their communities.

For female former child soldiers, the barriers are even greater. They have often been excluded from the DDR process, leaving them to become either social outcasts struggling to survive or an increased security threat. There is a widespread assumption that female former combatants act both physically and sexually inappropriate, which further complicates their reintegration. This stigma restricts their employment and marriage prospects. Because of their in-army and subsequent experiences, it also can be more challenging for female former combatants to manage their painful memories. ABA ROLI’s partner non-governmental organization, TPO Burundi, is providing psychological counseling and support to former female combatants.

To learn more about our work in Burundi, contact the ABA Rule of Law Initiative at <rol@staff.abanet.org>.