The federal court system in Nigeria faces significant challenges, including enormous backlogs at the trial, appellate and Supreme Court levels. This creates lengthy delays for court users seeking to reach a resolution for their cases and reduces public confidence in the court system. Three Nigerian court professionals participating in American Bar Association Rule of Law Initiative’s (ABA ROLI) International Justice Sector Education and Training (IJET) Fellowship Program recently spent a month in the U.S. learning ways to improve court efficiency through alternative dispute resolution (ADR) and have returned to Nigeria to make the case for the use of ADR in Nigeria’s federal courts. 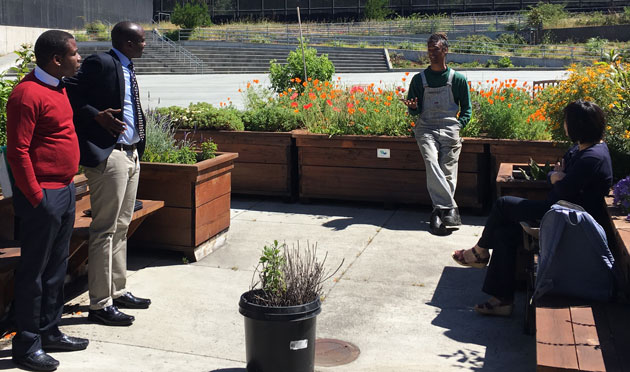 Christopher Olayiwola Ogundare, research assistant to the Chief Justice of Nigeria, Habiba Saddiq, senior research fellow at the Nigerian Judicial Institute and Obasi Vincent Ndubuisi, administrative officer and chair of the Staff Union at the Federal High Court of Nigeria took part in the four-week IJET Fellowship. The IJET Fellowship Program, which is supported by the U.S. Department of State Bureau of International Narcotics and Law Enforcement Affairs, brings leading justice sector actors from other countries to the U.S. for several weeks of customized academic and practical study and pairs them with U.S.-based mentors to design a project to effect long-term institutional changes in their home country. Upon their return to Nigeria, Ogundare, Saddiq and Ndubuisi formed a Change Team, which also includes IJET Fellow Zarah Babangida, senior registrar of the Supreme Court of Nigeria, to implement their change plan, entitled “Changing the Role of the Courts in Adjudication of Disputes: A Case for Enhanced Use of Alternative Dispute Resolution at the Supreme Court of Nigeria and Federal High Court of Nigeria.”

To develop the change plan, Ogundare, Saddiq and Ndubuisi visited many institutions and met with dozens of professional counterparts in the Washington, D.C., San Francisco, California and Annapolis, Maryland areas. The fellows were interested in learning about trial-waiver systems that could be adapted in Nigeria, noting that many persons accused of minor crimes in Nigeria remain in pre-trial detention for years while their cases make their way through the backlog. The fellows were particularly impressed by their visit to the San Francisco Veterans Justice Court, a collaborative court program that provides opportunities for mental health and substance abuse treatment, mentorship and vocational training for veterans of the U.S. armed forces who have committed criminal offenses, with the goal of reducing recidivism, protecting public safety and helping veterans lead productive lives.

Ogundare said that he “was struck by the fact that the justice system and indeed society cared so much for these often neglected heroes of the nation.” Noting that the court and gallery applauded for every veteran that complied with their diversion program each week, Ogundare said he felt he was “witnessing the true example of judicial compassion.”

The fellows also observed different models for court-referred and court-annexed mediation in civil cases, visiting courthouse ADR centers at D.C. Superior Court and the Federal District Court for the Northern District of California, as well as community mediation programs in Maryland and Virginia, which accept court-referred cases as well as cases brought in by community members.

The IJET Fellowship reached its high point as the fellows worked with their mentor, Jonathan Rosenthal, director of the Maryland Judiciary Mediation and Conflict Resolution Office. The fellows learned Maryland’s courts have nearly two million cases filed per year and would be unable to keep up with the caseload without the widespread use of ADR.

“Annapolis gave us the practical experience that gave meaning to the academic,” Ogundare said. “I was transfixed by a salubrious and purposeful environment where everyone seemed anxious to work for overall collective aim — an efficient justice system.”

Building on the model used in Maryland, which combines court-annexed and community-based ADR and provides opportunities for mediation at the trial and appellate levels, the IJET Fellows designed mediation programs for Nigeria to begin at the Supreme Court and Federal High Court, expand to other courts and incorporate traditional or customary dispute resolution mechanisms. In 15 of Nigeria’s 36 states, court-annexed or court-referred ADR systems already exist in some form, and the change plan builds on the successes of these state-level programs.

The complexities of the Nigerian justice system, which not only include the formal court system of civil, sharia, customary, subject-matter and appellate courts, but also many traditional mechanisms not annexed to the courts, create many opportunities for the development of robust mediation and restorative justice solutions, which the Change Plan refers to as ADR — “appropriate” dispute resolution for the African context. The fellows began implementation of the ADR system immediately upon returning to Nigeria, with the first phase of the Change Plan focused on establishing the Supreme Court Mediation Center and Federal High Court Multi-Door Courthouse. Their first step will be to form committees to review Supreme Court and Federal High Court cases and select those appropriate for mediation, followed by creating standard operating procedures and guidelines for mediation and creating selection criteria and training curricula for mediators. Throughout the first phase, the fellows and others involved in the Mediation Center and Multi-Door Courthouse will conduct outreach and cooperate with the Bar, the Government of Nigeria, and other stakeholders within the justice system and the general public. By late 2018 the fellows plan to expand the Change Plan to a second phase to create ADR systems in other federal courts and achieve recognition of customary and community-based ADR. By working with Nigerian judges, lawyers, traditional leaders and the general public, the fellows are confident these systems will improve the efficiency of the administration of justice at the federal level and, most importantly, increase access to justice for Nigerians.

According to Ogundare, ADR “will bring justice home to the people, which is where the foundation of a sound justice system ought to take root. It will help the average citizen to feel like he does not have to react to hurt by building a wall but rather by forging the cast iron bridge of fairness and honest dialogue, which can help foster understanding and a true view of what the other side must be thinking — an idea that no issue is too hard to discuss, no dispute too intractable to resolve, no conflict too far gone to de-escalate.”

To learn more about the International Justice Sector Education and Training Program, please contact the ABA Rule of Law Initiative at rol@americanbar.org.